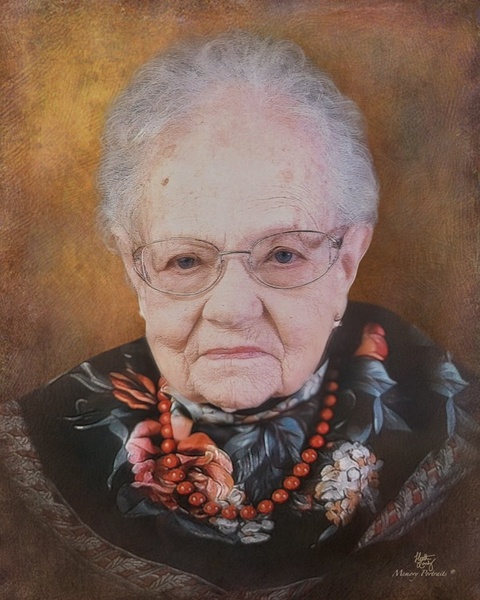 Zola Marie Brammer, of Kahoka, passed away peacefully at 2:55 am on Sunday, September 25, 2022, at the Clark County Nursing Home in Kahoka at the grand age of 102.

She was born on April 8, 1920, in Peaksville, the third oldest child of the late Everett & Esther “Essy” (Kautz) Evermon. Zola was raised by her Aunt Cora and Uncle Charles Sherwood. She attended Sugar Creek School and went on to graduate from Kahoka High School. Zola married Robert Brammer on April 9, 1939, at the United Methodist Church’s parsonage in Kahoka. She and Robert were married for over 60 years until he preceded her in death on June 30, 1998.

Zola and Robert fixed up a home in the country where they farmed and raised a family. She was a member of the Kahoka Christian Church. Zola was particularly fond of fried chicken legs from Ayerco, going for a ride in the car; especially if it was to get food from McDonalds for a picnic at the park in Keokuk. Zola lived on the farm until 2018 and made her home at the Clark County Nursing Home in Kahoka. Zola’s greatest joy came from visiting with her family and friends.

Funeral services honoring Zola’s life will be conducted at 12:00 pm on Saturday, October 29, 2022, at the Wilson & Triplett Funeral Home in Kahoka. Pastor Shawn McAfee will officiate. Interment will follow at the Kahoka City Cemetery. Visitation will be held from 10:00 am until the time of services on Saturday. Memorial contributions in memory of Zola are suggested to the Clark County Nursing Home Activity Fund, the Kahoka Cemetery or to the charity of the donor’s choice. You are invited to share your memories of Zola and leave a condolence at www.wilsontriplett.com

To order memorial trees or send flowers to the family in memory of Zola Brammer, please visit our flower store.