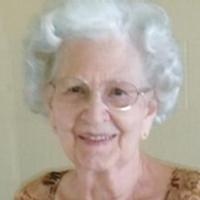 Zella Josephine Folk, age 85, of Kahoka, MO, passed away on Thursday, September 24, 2015 at the Clark Co. Nursing Home in Kahoka.

Josephine was born April 20, 1930 at her grandparent's home in Fort Madison, IA, a daughter of Joseph and Zella Sells Kerr.

She was preceded in death by her parents; her husband; a son, Jess Folk; one brother, Joe Kerr; and sisters-in-law, Esther and Shirley Kerr.

Josephine worked hard all of her life caring for her children and their livestock following a full day of nursing, never complaining about her lack of sleep. She loved caring for her flowers, watching the hummingbirds, doing crafts, and especially crocheting. As a caretaker all of her life, she became an unofficial "greeter" at the Clark Co. Nursing Home, spending much of her time talking with others, teaching the residents to crochet and helping them with their crafts. Her faith was always a very important part of her life.

Funeral services were held Monday, September 28, 2015 at 3:00 p.m. at Wilson Funeral Home in Kahoka with Pastor Shawn McAfee officiating. Special music was provided by Mrs. Rae Jean Martin, pianist, playing congregational hymns "How Great Thou Art" and "I Love To Tell The Story". Other music included recorded selections "Near To The Heart Of God" and "Because He Lives". Burial followed in Combs Cemetery at Luray. Pallbearers were: Justin Malone, Jerry Malone, Dale White, Stephen Casady, Jeremy West and Nathan White.

Friends called at Wilson Funeral Home after 9 a.m. Monday with family receiving friends from 1:30 p.m. until time of services.

Memorials may be made to the Clark Co. Nursing Home Activity Fund or the Peaksville Christian Church.

To send a flower arrangement to the family of Zella J. "Josephine Folk , please click here to visit our Sympathy Store.

To order memorial trees or send flowers to the family in memory of Zella Folk, please visit our flower store.