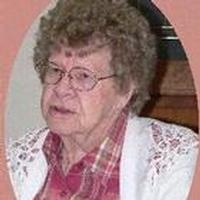 She was married on April 22, 1935 to George S. Winters in Keokuk and they were the parents of two children. She later married Grover C. Walls on May 5, 1951 in Clay County, Arkansas. He preceded her in death in August of 1971.

In earlier years, Wilma was owner and manager of the Airport Inn at Burlington and was a former employee at the Sylvania plant. After moving to Kahoka in 1972 she worked at Hemms CafÃ© as a waitress and also baked their pies. She was an expert with flowers, raising and selling African violets around the tri-state area. Together, Wilma and Grover bred and showed Samoyed dogs and at one time raised and owned the Female National Champion, in addition with several Champion males.

Wilma was a wonderful baker and sold her pies at Old Settlers, the Mule Festival, Farmers Market and at the Nutrition Site. She loved attending each of these events as much as she enjoyed selling her baked goods there. Each of her grandchildren always got their favorite dessert from grandma, whether it was a pie, cake or cookie. Further, she was an experienced seamstress who always made sure her family was well dressed. She loved her family dearly and

each day spent with them was a special day.

Burial was in the Keokuk (IA) National Cemetery.

Memorials were suggested to the Clark Co. Senior Center.

To order memorial trees or send flowers to the family in memory of Wilma Walls, please visit our flower store.