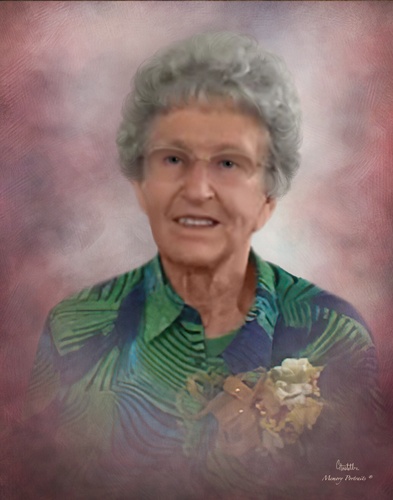 Wilma Fern Dieterich, 94, of Kahoka, passed away at 4:30pm on Monday, November 2, 2020 at the Clark County Nursing Home in Kahoka.

She was born on September 26, 1926 in Kirksville, Missouri. Wilma was the daughter of the late George Melvin (Slim) and Florence Ann (Gares) Kaylor. She married Donald “Doc” Dieterich on September 16, 1946 in Memphis, Missouri and together they were blessed with 74 years of marriage. Wilma attended Collins grade school; a one room schoolhouse. She graduated from Kahoka High School in 1944.

Wilma was employed as a bookkeeper for thirty-two years at the Kahoka Motor Company. She was a lifelong member of the Kahoka United Methodist Church and was a regular attendee at Sunday school and church. She helped out on many occasions with dinners held at the church. Wilma served as a Brownie and Girl Scout leader for her girls as they were growing up. She spent countless hours volunteering when the girls were in Rainbow Girls. Wilma made baby quilts for her great-grandchildren. She was well known for her “made from scratch” three-layer German chocolate cake and her family loved her homemade yeast donuts. Mrs. Dieterich loved following her grandchildren in their many activities. She thought nothing of getting in the car and traveling to Bloomfield, Iowa to watch a band competition or to Columbia, Missouri to watch the Final Four basketball games for the Clark County girls. She watched many soccer games in Oklahoma that her grandson Paul participated in and also attended several gymnastic events that Angie was involved in. Wilma loved to read and “the girls” as she called them at the Sever Library knew just what she liked.

Memorial services honoring the life of Wilma were conducted at 2:00 pm on Monday, November 9, 2020 at the Wilson & Triplett Funeral Home in Kahoka. Pastor Shawn McAfee officiated. Inurnment followed at Kahoka Cemetery.  A visitation was held from 12:00 pm until the time of services on Monday. Due to the coronavirus pandemic, those attending services were kindly requested to practice social distancing and to utilize a face covering. Memorial contributions in memory of Wilma were suggested to the Sever Public Library or to the Kahoka United Methodist Church and were accepted at the funeral home. You are invited to share your memories of Wilma and leave a condolence at www.wilsontriplett.com

To order memorial trees or send flowers to the family in memory of Wilma Dieterich, please visit our flower store.