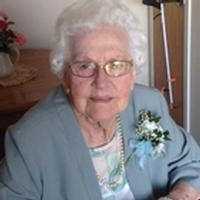 Wilma was born June 4, 1920 near Primrose in Van Buren Co, IA, a daughter of William and Sarah Schrepfer Corr.

She was united in marriage to Floyd H. Dienst on February 16, 1947 at the Messiah Lutheran Church in Keokuk. He preceded her in death on April 18, 1995.

She was preceded in death by her parents; her husband; two brothers, Delbert and Robert Corr; sisters-in-law and brothers-in-law, Ellen Corr, Kermit Dienst, and Cleta and Herbert Egley; and a nephew, Harold Egley.

Wilma spent the majority of her life as a homemaker and farmer's wife. She enjoyed putting in a big garden and sewed many items for her neighbors and family. She was a member of the Messiah Lutheran Church in Keokuk where she taught Sunday School and was a member of the Ladies' Aid and of the Missionary League. In her later years she was a familiar figure as she mowed her large acreage at her home east of Kahoka.

Funeral services will be held Friday, March 25, 2016 at 11 a.m. at Wilson Funeral Home in Kahoka with Rev. Lester Dumer officiating. Burial will follow in the Frazee Cemetery.

Friends may call at Wilson Funeral Home after 9 a.m. on Thursday with family receiving friends from 6-8 p.m.

Memorials are suggested to the Messiah Lutheran Church in Keokuk or the Frazee Cemetery.

To order memorial trees or send flowers to the family in memory of Wilma Dienst, please visit our flower store.