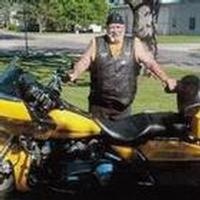 Bill was born May 28, 1950, in Fort Madison, IA, the son of Howard Glenn and Betty Jean Boyles Butts

He married Linda McCain and they were the parents of two sons, Jeremy and Jamie.
On July 27, 1990, he was united in marriage to Karen Dieterich Perry.

Bill received most of his schooling in West Burlington. He was an over the road truck driver, owner and operator for over 25 years, and had drove locally for Holland, Johnson and Dickey, as well as others. He was a retired Clark County employee. Since that time he had been hauling on a limited basis for Campbell Trucking.

Bill was an avid sportsman. He loved being outdoors, hunting, fishing, 4-wheeling, mudding, and riding his motorcycle with his many friends. He raced stock cars for many years mainly in the Burlington area in his car #34. One of the things he enjoyed was singing karaoke.
He also enjoyed visiting the local restaurants and sharing a story or two and picking on the employees.

Bill grew up in a large family and remained very close to all of them. Spending time with his family and many friends was very important to him.

A memorial service celebrating his life was held Tuesday, January 28, 2014 at 5 p.m. at Wilson Funeral Home in Kahoka with Pastor Shawn McAfee officiating. A reception and time of sharing followed at the Clark Co. Moose.

To send a flower arrangement to the family of William J. "Bill" Butts , please click here to visit our Sympathy Store.

To order memorial trees or send flowers to the family in memory of William Butts, please visit our flower store.