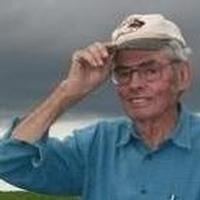 Wayne was born March 12, 1924, the son of Otto George and Mary May Barton Meinhardt, at Luray on the family farm where he and his family made their home.

He married Mertice A. Hunziker on September 7, 1947 at the Methodist Parsonage in Kahoka.

He was preceded in death by a sister, Wilma Galbraith and her husband, Robert; two brothers, George Meinhardt and his wife, Lurla, and Dale Meinhardt; and brother-in-law, Melvin Hunziker.

Wayne graduated from High School in Milton, IA, and served in the US Army during the occupation of Japan.

He farmed all of his life and was an "antiquer". He loved to hunt for the bargain and restore antique tractors and cars. He had recently began collecting windmills. He proud to be a recipient of the Soil Conservation Award.

Wayne was a community-minded person and belonged to various organizations including the Clark Co. Fire Corporation board, Luray School Board, and former telephone board. He was an active member of the Fox Valley Two-Cylinder Club.

Wayne became a member of the Luray Methodist Church at the age of eleven when he was baptized in the Clyde Peters' pond.

Wayne was a 50 year member of Hiram Lodge # 192, A.F. & A.M. at Wayland. He enjoyed pulling antique tractors and attending pulls. It was a joy to him to be able to help build his grandkids a cabin on the pond at the family farm and a dream come true. He loved his fellowship at the local coffee shops and at the former Hawkins Station at Luray.

Memorials were suggested to the Luray United Methodist Church.

To send a flower arrangement to the family of Wayne E. Meinhardt , please click here to visit our Sympathy Store.

To order memorial trees or send flowers to the family in memory of Wayne Meinhardt, please visit our flower store.