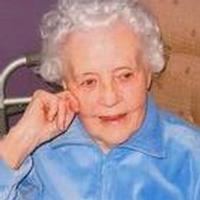 Wanda was born on January 2, 1919 in her parents' home in Libertyville, Iowa. She was the daughter of Elmer and Irma Peebler Copeland. Wanda spent her childhood on their family farm near Libertyville.

Wanda graduated from Batavia High School in Batavia, Iowa in 1936. She was employed at the Army Ammunition Plant in Burlington, Iowa and there met her future husband. They first lived in Burlington and Ft. Madison, Iowa before moving to Kahoka where they sold used cars. Wanda lived in the same house on Exchange Street for almost 60 years.

After Hollis contracted MS, Wanda cared for him and they raised three children. After Hollis' death, Wanda went to work at Sheller-Globe Corporation and retired from there in 1981.
Wanda was a longtime and faithful member of the Kahoka United Methodist Church. She played the organ there for almost 50 years and was organist at countless weddings and funerals in Kahoka. She was an important part of her children's and grandchildren's lives and will be greatly missed.

Wanda was preceded in death by her parents, her husband, one son, Kent Short, one sister, Remona Morgan, and three brothers-in-law, Wallace Short, Leon Short, and Dwight Morgan.

Funeral services were held Thursday, May 30, 2013 at 10:30 a.m. at Wilson Funeral Home in Kahoka with Pastor Tim Morgan officiating.

Burial was in the Pleasant Grove Cemetery, Gorin, MO.

Memorials were suggested to the Kahoka United Methodist Church or the Clark Co. Nursing Home.

To send a flower arrangement to the family of Wanda A. Short , please click here to visit our Sympathy Store.

To order memorial trees or send flowers to the family in memory of Wanda Short, please visit our flower store.