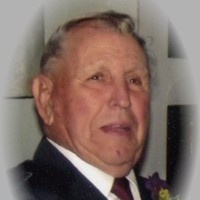 Walt graduated from high school in Mason City, where he broke records and medaled in boxing, wrestling and track. He achieved the Golden Glove Award in boxing. He was also known during that time for "hot rodding".

Walt owned and operated King’s Auto Salvage and was always looking for a good deal.

He was very content in his life and loved driving around town with his dogs chasing behind. He enjoyed spending time with the locals near and on the Mississippi River and had a passion for Grey Island. He also enjoyed "Hee Haw" and the "Grand ‘Ole Opry". He cherished his friendship with long-time school friends, Red Taylor and Charlie Joint, Jerry and Cindy Colwell, and many others in the community. More than anything, he loved spending time with his grandchildren and his dogs.

Friends could call at Wilson Funeral Home after 9:00 a.m. Monday with family receiving friends from 12 noon until services at 1:00 p.m.

Memorials were made to the family with checks made payable to Dan King.

On-line condolences could expressed at www.wilsonfuneralservice.com.

To send a flower arrangement to the family of Walt D. King , please click here to visit our Sympathy Store.

Friends can call at Wilson Funeral Home after 10 a.m. Monday with family receiving friends from 12:00 until 1:00 p.m..

Friends can call at Wilson Funeral Home after 10 a.m. Monday with family receiving friends from 12:00 until 1:00 p.m..

To order memorial trees or send flowers to the family in memory of Walt King, please visit our flower store.