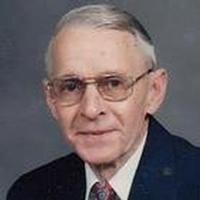 Vernon L. Gutting, age 91, of rural Kahoka, MO, died peacefully on Tuesday, January 21, 2014 at home with his daughter at his side.

Vernon was born July 1, 1922 north of Kahoka, the son of William S. and Tillie May Peckham Gutting. He was the last living grandchild of John and Teresa Burbach Gutting who immigrated to America from Bavaria in the 1860s.

He was united in marriage to the love of his life, Julia Ann Zinnert on February 7, 1948 at St. Paul United Church of Christ in Kahoka, MO. She preceded him in death on February 14, 1988, one week following the celebration of their 40th wedding anniversary.

He was preceded in death by his father on July 31, 1922 and mother on August 29, 1938; his wife, Julia, on February 14, 1988; siblings: William Delbert Gutting on October 6, 1991 and his wife Mabel Fern Elwell Gutting, Clell Alfredo Gutting on June 15, 1983 and his wife, Mary Virginia Trenor Gutting, Theresa May Deobler Gaworski on November 15, 2001 and her husbands Norman Deobler and Alexander Gaworski, Roscoe Allen Gutting on January 1, 2006 and his wives, Gwendolyn Agusta Roediger Gutting and Frances Lipscomb Gutting, and two infant brothers, one on April 13, 1912; brother-in-law, Richard Norman Vogel; a nephew, William Malcolm Gutting and niece, Judith Louise Gutting.

Vernon was a 1940 graduate of Kahoka High School, captain of the basketball team and senior class vice president. A Disabled American Veteran, Vernon was a veteran of World War II, serving in the Army Air Corps with the 5th Air Force, 90th Bomb Group, also known as the "Jolly Rogers". He attained the rank of Staff Sgt., participating in 44 missions. He was a nosegunner on a B-24 Liberator in the point flight aircraft flying missions over New Guinea, Borneo, China, Guam, and Formosa (Taiwan), Okinawa, and the Phillippines. He was scheduled to be in the invasion force of Japan. He also served as an aerial reconnaissance photographer for Army intelligence. One of the highlights of his life was participating in the Honor Flight to see the World War II Memorial in Washington, DC accompanied by his daughter as guardian. The freedoms we enjoy in the United States were very important to Vernon and he served his country with honor before, during, and after the war.

Vernon was a former member and founder of the Kahoka Housing Corporation. He was also a member of Herman Blum Post #192, American Legion at Kahoka and a 60 year plus member of St. Francisville Lodge # 588, A.F. & A.M.

Vernon was a livestock and grain farmer all of his life and had been an assistant Postmaster, was a Clark Co. Deputy Sheriff for 8 years, Clark Co. Assessor for twelve years, and later in life drove a school bus for the Clark Co. R-1 School district. He believed in working hard in all that he did. A day off was something he could hardly comprehend.

He enjoyed sports, particularly basketball and football. He loved to fish and be outside. He had a wealth of knowledge and was very curious and interested in learning all he could about the world and benefitted from Angela's many travels. He cared deeply about the world he lived in and its' people. He loved and cherished his wife, Julia, and daughter, Angela.

Memorials in lieu of flowers may be made to the Clark Co. Rescue Squad or the Kahoka Christian Church.

To send a flower arrangement to the family of Vernon L. Gutting , please click here to visit our Sympathy Store.

To order memorial trees or send flowers to the family in memory of Vernon Gutting, please visit our flower store.