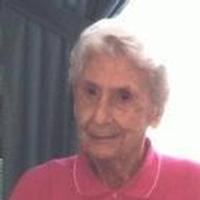 Vergie was born July 27, 1910, in West Point, IA, the daughter of John and Belle Hosier Danover.

She was preceded in death by her parents; her husband, Oland; and two brothers, Hugh and Merle Danover.

Vergie graduated from Denmark High School. She was employed at the Nifty Thrift Grocery Store and then for many years at Waldorf Drug located in the Hotel Iowa. Later she worked at Wilkens Drug at Fort Madison in the cosmetics department.

She was a member of St. Paul United Church of Christ in Kahoka. Vergie and Oland loved traveling, music, the arts, ballroom dancing, and dancing to Big Band music. Her dogs and horses were a very special part of her life.

Funeral services were held Friday, April 15, 2011 at 11 a.m. at Wilson Funeral Home in Kahoka with Rev. Kenneth Beckmann officiating. Burial was in the Kahoka Cemetery.

Memorials were suggested to St. Paul United Church of Christ in Kahoka.

To order memorial trees or send flowers to the family in memory of Vergie Wilson, please visit our flower store.