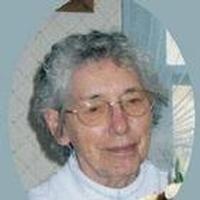 Vera and her twin brother, Vernon, were born November 6, 1916, to Charles H. and Edith Mae Brookhart Welker, at their home near Williamstown.

Vera graduated from Ballard High School and received her R. N. in nursing at Kirkwood, MO. She was a 2nd Lt. in the U. S. Army during World War II, serving as a U. S. Army Nurse stationed in the Pacific.

On August 4, 1950, she was united in marriage to Charles Otis Brookhart at the home in which she was born. Otis preceded her in death on February 3, 1992.

She was preceded in death by her parents; her husband; four brothers: Charles William and Melba Welker, Lester and Chester Welker, and her twin, Vernon and Twila Welker; brothers-in-law and sisters-in-law: Glen and LaJune Brookhart, Leona and Don Waller, Everett and Wilma Brookhart, Eldon and Julia Brookhart and W. Ralph Brookhart.

Vera had worked for Dr. Willis, Sunny Acres, Clark Co. Nursing Home and a year in Keokuk during her nursing career. She loved being a homemaker and the chance to instill values in her children and families. She was a member of the South Wyaconda Baptist Church and her faith and church life were very important to her. She was very creative and could make something out of nothing. She had served as a 4-H leader as her children were growing up. Vera always enjoyed growing a big garden and reaping its harvest.

Funeral services were held Wednesday, December 21, 2011, at 10:30 a.m. at the South Wyaconda Baptist Church with Pastor Mark Boley officiating. Burial was in the Ballard Cemetery with military rites.

Visitation was held at Wilson Funeral Home after 9 a.m. Tuesday with family receiving friends from 6-8 p.m.

Memorials were suggested to the Ballard Cemetery or Gideon's International.

To order memorial trees or send flowers to the family in memory of Vera Brookhart, please visit our flower store.