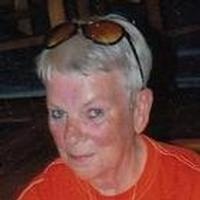 Trudy A. Malone, age 66, of Kahoka, MO, died peacefully on Friday, January 10, 2014, at her home in Kahoka following a battle with cancer.

Trudy was born July 20, 1947 at Sacramento, CA, a daughter of Paul and Joyce Jones Wallace. Following her parents' death, she was raised by her aunt and uncle, LaVera and Don Worrell.

She was preceded in death by her parents; her husband; and her aunt who raised her, LaVera Wallace Worrell.

Trudy graduated from Kahoka High School. She spent most of her time as a homemaker, caring for her husband and children. Prior to her retirement, she had spent the previous seventeen years as an employee of C & R in Kahoka.

Trudy was a "people" person, she never knew a stranger and loved to bring joy to those she came in contact with. She was blessed to have married the love of her life and the time they spent together at their home in the country enjoying nature, watching their hummingbirds play at their feeders, and watching the grass grow, was a treasured memory. She loved to read, play games, and work crossword puzzles. She was an excellent cook and enjoyed time spent with her children and their families and her dog and best friend, Weebles.

Funeral services were held Monday, January 13, 2014 at 10 a.m. at Wilson Funeral Home in Kahoka with Pastor Glen Yoder officiating. Burial was in the Kahoka Cemetery.


Memorials may be made to the family.

To send a flower arrangement to the family of Trudy A. Malone , please click here to visit our Sympathy Store.

To order memorial trees or send flowers to the family in memory of Trudy Malone, please visit our flower store.