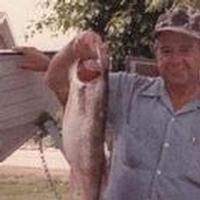 He married Betty Barry on July 27, 1951 at St. Michael's Parsonage in Kahoka.

He was preceded in death by his parents and four brothers, Joe, John, Jim and Bob Logsdon.

Tom received all twelve years of his education at St. Patrick. His church and his faith played a very significant part in the way he lived his life. He was a member of St. Michael's Catholic Church in Kahoka and President of the St. Patrick Cemetery Board. For 33 years he was employed by the family business, Logsdon Elevator, in Wayland and Gregory Landing, retiring in 1977. The rest of his years were spent doing the things he loved best - caring for what needed done at the church and in the community, putting in a large garden, nutting and fishing.

A Memorial Mass of Christian Burial was held Monday, August 27, 2012, at 10 a.m. at the Shrine of St. Patrick, St. Patrick, MO, with Rev. James Wheeler officiant assisted by Kristin Roth.

Inurnment was in the St. Patrick Cemetery.

Memorials were suggested to the St. Patrick Cemetery.

To order memorial trees or send flowers to the family in memory of Thomas Logsdon, Sr., please visit our flower store.