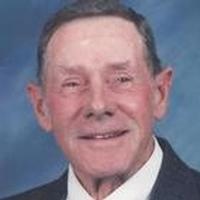 On March 12, 1955, he was united in marriage to Betty D. Bullerd at St. Paul United Church of Christ in Kahoka by Rev. Arnold W. Geske. One child, Carol Sue, was born to this couple.

He was preceded in death by his parents; two brothers-in-law, Otho Peters and Robert Kullman;and an infant brother-in-law, Claude Bullerd, Jr.

He attended Pleasant View # 42, a one-room school, with grades 1 thru 8. He graduated from Kahoka High School in May of 1947.

After helping move grain and livestock out of the way of the flood of ‘47, he helped on the family farm. He worked in Keokuk thru the winter, then in spring helped on farms east of Wayland.

In 1951 he enlisted in the Navy. Following boot camp and two schools, he was stationed at Sand Point and Ault Field in Washington. He was assigned to a flight crew and flew about 100 hours a month for 2 ½ years. He was honorably discharged in 1959. Fourteen months of his service were flights around Korea. He was proud to have participated in the Great River Honor Flight.

He worked for Paul V. Little for one year and again on farms east of Wayland. On December 31, 1957, he started with Missouri Department of Transportation, working in Clark County and later in Pike County. He retired on December 31, 1990. Following his retirement he subbed as a school bus driver in Pike County and then for Clark Co. He retired from driving after almost 15 years.

He attended the Wayland United Methodist Church and First Baptist Church in Louisiana, MO and Kahoka and was a member of the American Legion.

In earlier years, Theron and Betty enjoyed traveling and camping all over the United States. They loved to square dance and round dance and Theron eventually became a caller.
He loved to read, watch tv visit and drink coffee at the local coffee shops . He enjoyed playing cards with friends in Louisiana and at the Senior Housing in Kahoka. He could figure out how to do/fix anything and was always willing to lend a helping hand to others. He was one of several who built the four Habitat for Humanity Homes in Kahoka. His greatest pride was his grandkids.

Military Rites and Inurnment followed in the Kahoka Cemetery.

Memorials are suggested to the Kahoka Cemetery, the Clark Co. Local Cancer Fund, or the Great River Honor Flight.

To send a flower arrangement to the family of Theron Merryl McCoy , please click here to visit our Sympathy Store.

To order memorial trees or send flowers to the family in memory of Theron McCoy, please visit our flower store.