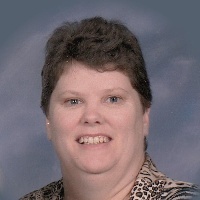 Teresa was born May 5, 1961 in Keokuk, IA, a daughter of James and Doris Pilkington Carlson.

She was educated in the Catholic school system, graduating from Cardinal Stritch High School with the Class of 1979 and attended SCC.

She was preceded in death by her father; her husband; two brothers, Raymond and Christopher Carlson; and daughter-in-law, Heather Lambert-Pullins.

Teresa was a faithful member and volunteer at All Saints Catholic Church in Keokuk and also volunteered at St. Vincent’s and Cardinal Stritch. Most of her life was spent as a homemaker, but she also enjoyed working part time at the Hoerner YMCA as a water aerobics instructor. Most of the things she did involved helping others. Teresa was a Wayland First Responder and was formerly active on the Wayland Fire Dept. and Clark Co. Rescue Squad. She worked hard to receive her EMT license and had been a part-time EMT with the Clark County Ambulance District.

She collected angels and wind chimes and treasured her family.

A Mass of Christian Burial was held Thursday, June 20, 2019 at 10 a.m. at All Saints Catholic Church in Keokuk. Burial followed in the Frazee Cemetery.

Memorials in lieu of flowers are suggested to the Wayland Fire Department First Responders.

To send a flower arrangement to the family of Teresa A. Pullins , please click here to visit our Sympathy Store.

Friends may call at Wilson Funeral Home after 9 a.m. Wednesday with family receiving friends from 5-7 p.m.

Friends may call at Wilson Funeral Home after 9 a.m. Wednesday with family receiving friends from 5-7 p.m.

To order memorial trees or send flowers to the family in memory of Teresa Pullins, please visit our flower store.