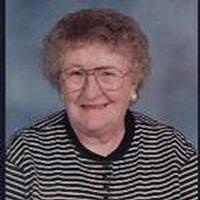 She was born November 23, 1933, at Farmington, IA, a daughter of David and Bettie

On January 27, 1952, she was united in marriage to John Robert Butler at the Christian Church parsonage in Kahoka by Rev. Golden.

She was preceded in death by her parents; her husband; and siblings: Harold, Raymond, Roy, and Floyd Krouse, Goldie Pitney, Faye Shearer, Mildred Martin, Unice Hite, Irene Smith, Rosey Van Patten and Wilma Carroll and one in infancy.

Sylvia graduated from Kahoka High School. She worked various jobs through the years including as a cook at the Luray School, operating a cafÃ© in Luray and had been employed at one time at Barkers at Bonaparte. Most of her life was spent as a homemaker, caring for her children, growing a big garden and canning, and spending quality time with her grandchildren. Her faith was an important part of her life and she shared those values with her friends and family. She was a long-time member of the Luray Baptist Church and enjoyed the fellowship there. She was a member of the Red Hat Society and loved being with her sister redhatters and all of the traveling and time spent together.

Funeral services were held Friday, November 18, 2011 at 2 p.m. at Wilson Funeral Home in Kahoka with Pastor Mark Lowman officiating. Burial was in the Combs Cemetery at Luray.

Visitation was held at Wilson Funeral Home after 9 a.m. Thursday with family receiving friends from 6-8 p.m.

Memorials were suggested to the Luray Baptist Church or the Combs Cemetery.

To order memorial trees or send flowers to the family in memory of Sylvia Butler, please visit our flower store.