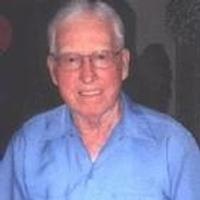 Survivors include a sister, Marguerite LaMaster of Keokuk, IA; nieces and nephews and their families: Larry and Gayle LaMaster of Independence, MO, Judy and Steve Comfort of Kirkwood, MO, Gary and Elodie Sellers of Fairfield, IA, Linda and Darrell Lamer of Salina, KS and Randy and Marla Sellers of Lenexa, KS.

He graduated from Gorin High School where he was captain of the basketball team. During World War II, "Red" was a foreman for Consolidated Aircraft in San Diego, CA. He returned to Missouri following the war where he farmed in partnership with his brother, Ted, until retirement. They moved to Kahoka following retirement and enjoyed bowling, golfing, dancing and visiting with friends and playing cards at the Senior Center. "Red" was a charter member of the Twin Lake Golf Course and recently had participated in the Old Settler's Parade as King of the Clark Co. Senior Center. He was an active member of the Kahoka United Methodist Church and a familiar face on each Sunday. He enjoyed the fellowship and friendships he made through each activity he participated in. He lived every area of his life with integrity and honesty.

Funeral services were held Thursday, September 2, 2010 at 10:30 a.m. at Wilson Funeral Home in Kahoka with Pastor Barb Hagerla officiating. Burial was in the Kahoka Cemetery.

Memorials were suggested to the Kahoka United Methodist Church.

To order memorial trees or send flowers to the family in memory of Sylvan Sellers, please visit our flower store.