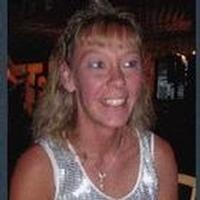 Nicki was born March 23, 1973 in Keokuk, IA, a daughter of Martin Keith and Dianna Rogers Washburn.

She was married to Curtis Jones and they were the parents of Brittney and Hailey. Curtis preceded her in death. She later married Harley Hill and to this union was born a daughter, Hanna. On May 21, 2010, she married Kevin Dochterman at his parents home in Williamstown, MO. Two days later she found out that she had cancer.

Nicki was a very talented musician. She D.J.d at Clark Co. High School dances for many years, sang at a lot of cancer benefits and other benefits for others throughout the tri-state

area, sang at many weddings and funerals; and was well-known for entertaining at various other functions and venues in the area. She was a member of the former Tin Star band for several years and sang quite often with her father.

Nicki was a member of Crossview Fellowship at Keokuk and on December 2, 2011 was baptised while a patient in Iowa City. She was employed at River Hills as transportation coordinator as long as her health permitted and performed other duties as needed at the nursing home.

Friends could call at Wilson Funeral Home after 9 a.m. Wednesday with family receiving friends from 6-8 p.m. Memorials are suggested to the family for her children's education.

To order memorial trees or send flowers to the family in memory of Simone Dochterman, please visit our flower store.