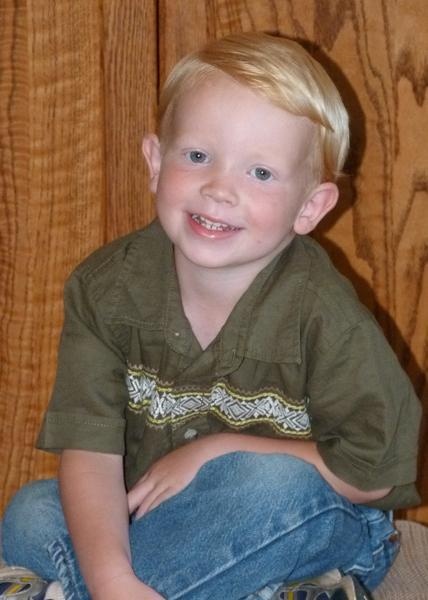 Sawyer Elijah Jacobson, age 3 of Kahoka, MO, died in a one vehicle accident east of Kahoka on Monday, December 31, 2012.

Sawyer loved music and playing games, trucks, Lincoln Logs and teaching his little brother about things. He loved helping his dad and recently had went trapping with him. Being outside was one of his favorite things and he loved to hunt in his yard and throughout his house. He loved to color and was starting to learn his letters. He was curious about things and absorbed everything around him, including how to take things apart and try to figure out how they worked. He especially loved his brother, Lance, and playing with his church friends and cousins. He was a member of Awanas and of Story Hour at the library. Three of his favorite shows were "Curious George", "Thomas the Train", and "Bob the Builder", all of which fit his personality.

Sawyer was a precocious, exuberant, energetic "Big Boy" who loved life, adored his little brother, and was always excited about going "bye-bye".

Funeral services were held Saturday, January 5, 2013 at 10:30 a.m. at the First Baptist Church in Kahoka with Pastor Lonnie Nelson officiating. Burial was in the Kahoka Cemetery.

Memorials were suggested to the family to be established at a later date.

To send a flower arrangement to the family of Sawyer Elijah Jacobson , please click here to visit our Sympathy Store.

To order memorial trees or send flowers to the family in memory of Sawyer Jacobson, please visit our flower store.