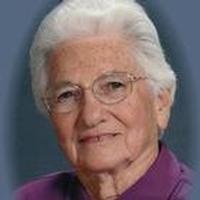 She was preceded in death by her parents, her husband, and three grandchildren.

Ruth was a graduate of Joliet Township High School, Joliet Junior College and of College of St. Francis, all of Joliet, IL, and where she received her B.S. degree.

She began her teaching career in a one-room school in Peotone, IL. She worked seventeen years as a representative for Chicago Goodwill Industries. When they moved to Missouri, she taught at Revere C-3 School. Following retirement, she was a daily volunteer in the kindergarten classroom at Blackhawk Elementary for twelve years. Beginning in 2005 she was a daily volunteer at Sever Memorial Library in Kahoka as long as her health permitted.

Ruth was a faithful member of Peaksville Christian Church, dedicated to its' ministry, serving as Secretary of the Church Board, Secretary of the Fellowship and Sunday School Teacher for many years.

Her devoted service to her community and her church reached the hearts of many who will remember her with fondness and love.

Memorial services were held Sunday, December 14, 2014 at 1 p.m. at the Peaksville Christian Church.

Memorials were suggested to the Peaksville Christian Church or the H.E. Sever Memorial Library.

To send a flower arrangement to the family of Ruth M. Sebben , please click here to visit our Sympathy Store.

To order memorial trees or send flowers to the family in memory of Ruth Sebben, please visit our flower store.