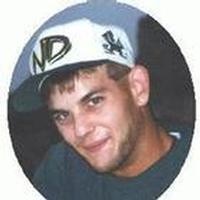 He married Wendy Ash and they were the parents of Jayvin and Ashlyn. He later married

He was preceded in death by his father on June 21, 2008; his grandparents, James and Neva Adamson, and two uncles, Roy and Jerry Ray.

Rusty was a 1991 graduate of Revere High School. He was baptized as a youth in the Luray Baptist Church and later became a member of the Wyaconda Christian Church.

Rusty had been employed at Sommers and Sons Sawmill until becoming disabled in September of 2007. He loved hunting, fishing, hunting arrowheads, collecting swords and antique coca cola products, and was an avid history buff. He loved spending time with his children and his dogs, Duke and Honey Bunny.

2009, at 2 p.m. at Wilson Funeral Home in Kahoka with Pastors Shawn McAfee and Debra Letcher officiating. Burial was in Kahoka Cemetery.

Memorials in lieu of flowers were suggested to the family.

To order memorial trees or send flowers to the family in memory of Rusty Ray, please visit our flower store.