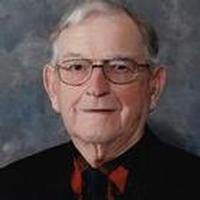 "Jack" was born July 12, 1919 in Alexandria, MO, a son of George H. and Nellie Conway Murphy. He was the last living of thirteen children born to this union.

"Jack" graduated from Wayland High School in 1937. He farmed all of his life and for a number of years had a plumbing and trenching business. At one time his family supplied pickles to the Pickle Factory in Keokuk, which turned into an extended family business as he solicited pickers from his children and vast array of nieces and nephews.

He was a member of the Kahoka Christian Church and a 60 plus year member of St. Francisville Lodge # 588, A.F. and A.M. He lived the values of each and instilled them in those he knew. He devoted his life to his family, his church, and the Masonic lodge.

Funeral services were held Tuesday, April 30, 2013 at 1 p.m. at Wilson Funeral Home in Kahoka with Rev. Jim Campbell officiating. Burial was in the Kahoka Cemetery.


Memorials were suggested to the Kahoka Christian Church or the Wayland United Methodist Church.

To send a flower arrangement to the family of Russell D. "Jack" Murphy , please click here to visit our Sympathy Store.

To order memorial trees or send flowers to the family in memory of Russell Murphy, please visit our flower store.