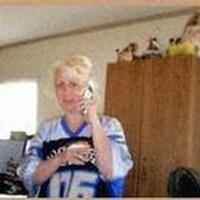 Rosie was born October 27, 1971 at Keokuk, IA, a daughter of Lawrence F. and Vada Moss Heimer.

She had been married to Glenn Roberts and they were the parents of two children, Jerry D. Roberts and Destiny Dawn Roberts.

Survivors include her children, Jerry and Destiny, both of Wayland; her siblings including

Charles Heimer of Mississippi, Ray (Leona) Heimer of Kahoka, and Betty (Dave) Armstrong of Eldon, IA; aunts and uncles: Forrest and Rovene Moss and Osa Clay and Merle Davis, all of Kahoka, George Protsman of Kahoka who was like a father to her; Glenn Roberts and his family who have always been a very important part of her life; as well as nieces, nephews, cousins and other relatives.

Rosie received her GED and later took additional college classes. She had held various jobs, but her most rewarding was as homemaker and mother.

She like to do craft work, especially making beautiful dream catchers, going to as many yard sales as possible, and spending time on her computer and repairing them. She loved caring for pets and had a breeding license. More than anything she loved her children and spending time with family and friends.

To order memorial trees or send flowers to the family in memory of Rosie Roberts, please visit our flower store.