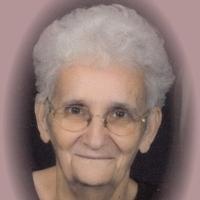 Rose was born December 23, 1936 at Keokuk, a daughter of Lovell Atwood and Ruby Pearl Courtney Dawson.

She was united in marriage on May 9, 1954 to Gale Schreiber at his parent’s home.

She was preceded in death by her parents; a sister, Peggy Hecox; and two grandsons, Adam Schreiber and Austin Hopp.

Rose was a member of the Revere Community Church. She was a house wife and farm wife and babysat for all her grandchildren and some of her great. She was active in the PTO, in 4H assisting kids and grandkids with their livestock and whatever project they might have and spent hours following the sports activities of her family. She was an excellent cook and baker and passed on that talent to her daughters. She sewed most of her kid’s clothes, could sew anything, and made blankets for all of her children, grandchildren and for her great as long as her health permitted. When the kids were little she and Gale loved to square dance and it was an activity for the social life of their kids as well.

Funeral services were held Monday, February 27, 2017 at 10:30 a.m. at Wilson Funeral Home in Kahoka with Rev. Goldie Laymon officiating. Recorded music selections included: "I Can Only Imagine", "Amazing Grace" and ""Humble and Kind". Burial will follow in the Revere Cemetery.

Memorials may be to the family or to the Alzheimer’s Association for Research.


To plant Memorial Trees in memory of Rose A. Schreiber , please click here to visit our Sympathy Store.

Friends may call at Wilson Funeral Home after 10:00 a.m. Sunday with family receiving friends from 4-6 p.m.

Friends may call at Wilson Funeral Home after 10:00 a.m. Sunday with family receiving friends from 4-6 p.m.

To order memorial trees or send flowers to the family in memory of Rose Schreiber, please visit our flower store.