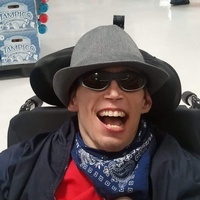 Rocky was born May 24, 1978 in Keokuk, IA, the son of Randall and Pam Phillips Briscoe.

He attended Mississipi Valley State School in Hannibal from the age of 5 until he was 21 where his favorite teacher gave him the name "Rock Star" and his best buddy there called him "Hollywood" because he always wore sunglasses.

Rocky enjoyed game shows, videos of himself, flirting with girls, going to town and balloons. He had a smile that would warm the coldest heart and communicated with his eyes and smile. He was always stylin’, especially when wearing his sunglasses and neck scarf. He taught others what a pure heart and true love is about.

Rocky never hid his light under a bushel basket, but let his shine to lift others in their darkness. He was a hero to his mudder and dad and others around him. His dog, Yadi, who loved to jump on Rock’s lap and catch a ride, was rarely far from him. Rocky enjoyed giving rides as much as Yadi loved getting them.

To send a flower arrangement to the family of Rocky "RockStar" Briscoe , please click here to visit our Sympathy Store.

Friends may call at Wilson Funeral Home after 3 p.m. Tuesday with family receiving friends from 5-8 p.m.

Friends may call at Wilson Funeral Home after 3 p.m. Tuesday with family receiving friends from 5-8 p.m.

To order memorial trees or send flowers to the family in memory of Rocky Briscoe, please visit our flower store.