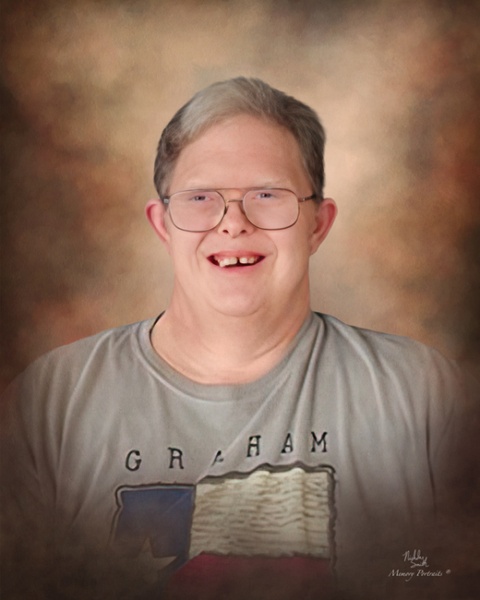 Robert Craig Kuntz, of Clark County, MO. Nursing Home, was born January 6, 1957, in Keokuk, IA. He passed away July 2, 2022. His parents were Craig and Wilma (Halferty) Kuntz. Bobby was a member of St. Paul United church in Kahoka, MO. He attended kindergarten under Mrs. John Graham and elementary school classes under Mrs. Rose Fore of which he was very proud. He loved Mrs. Fore. He worked from Feb.26, 1975 until Nov.15, 2012, 37 plus years at Industrial Opportunities in Kahoka. While at the workshop, he worked with recycling and bailed cardboard with what was named, “Bob's bailer”. Bobby was a loving person. He loved fishing, riding his 4-wheeler, eating out at restaurants, trips to Branson, MO. music, helping his dad with chores and helping his mother with housework. Although he had the handicap of Down Syndrome, he learned many tasks such as cooking, housework, lawn care, and working in his mother's garden. Most of all, he loved hugs.

He was proceeded in death by all of his grandparents, parents and a brother David. He is survived by one brother Ronald and a sister-in-law Karen, of Marietta, GA. Nephew Chad Kuntz and his children Lauren and husband Wayne Ducet and their daughter Aleigh, Rhegan and her husband Trey Faucheux and daughter Aubrey and Cade Kuntz all of Prairieville, LA, nephew Bret Kuntz and wife Sommer and their children Brendan, Journee and Canaan of Prairieville, LA. Niece Carrie Moix and husband Gary of San Antonio, TX. Nephew Craig Kuntz and wife Angela, their children, David, Raymond, Elenor and Gregory all of Cordova AK, Stepsister Kay Parris of Poplar Grove, Il. Kay's daughter, Johnna Garner of Clarklake, MI. Son Konrad Parris and wife Suzi and their children, John, and Ava of Capron, Il. and daughter Jennifer Parris and Debbie Dilks of Zephyrhills, FL. Step nephew Tony Young and wife, Pinky, of Signal Mountain, TN. Their children, Cecilia Garrett and husband Parker and daughter Lila, of Chattanooga, TN. Mallory Maldon and husband Kyle of Atlanta, GA. Olivia Young of Knoxville, TN. Step nephew Shawn Young and wife Valerie and their children, Fiona and Sean, of Loveland, OH, step niece Angela Boggess and husband Mike of Ooltewah, TN. and their children, Avery and wife Hannah-Claire Boggess of Knoxville, TN. Alicia Boggess of Cleveland, TN. Eric and Chase Boggess of Ooltewah, TN.

Arrangements will be announced at a later date at Wilson & Triplett Funeral Home in Kahoka.

To order memorial trees or send flowers to the family in memory of Robert Kuntz, please visit our flower store.