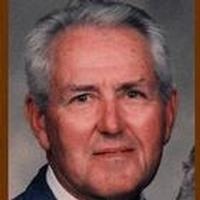 ROBERT E. BOON Robert Earl Boon, age 90, of rural Luray, MO, died suddenly on Tuesday, July 24, 2012 at his home. Robert was born January 6, 1922 at Chambersburg, MO, a son of Earl C. and Lola Vivian Perry Boon. He graduated from Fort Madison High School in 1941 and on September 3, 1944, married Eva Dale Coffey while he was serving in the U.S. Coast Guard during World War II. Survivors include twin daughters, Virginia Warheit of Berkeley, CA and Vivian Murphy of Keokuk, IA; three grandchildren, Vanessa Ingle-Warheit (Mrs. Nicholas) of Palo Alto, CA, Jennifer Murphy of Iowa City, IA and Timothy (Tracy) Murphy of Luray, MO; four great grandchildren, Elliot Ingle, Cameron and Lauren Moody and Tony Murphy and his fiancé�© Karisa Hinckley; a sister, Lola Mae Boon of Adel, IA; sister-in-law Shirley Boon of Fort Madison, IA; as well as nieces, nephews and other relatives. He was preceded in death by his parents; his wife; a brother, Charles Boon; and a great grand-child, Ryan Michael Murphy. Following his discharge from military service, Robert returned to Fort Madison where he worked at the Shaeffer Pen Co. for several years before taking up farming for the remainder of his life. He was an active member of the former Revere Community Church and a former member of the Chambersburg Cemetery Board. He had enjoyed gardening in his earlier years but his true passion was caring for his land and his cattle. He believed in sustainable farming before it became fashionable and spent his effort on reclaiming pasture and land. He was a true steward of the earth as God has instructed all of us to be. Funeral services were held Saturday, July 28, 2012, at 1:30 p.m. at Peaksville Christian Church with Pastor Shawn McAfee officiating. Burial was in the Chambersburg Cemetery.
Memorials were suggested to the Chambersburg Cemetery.

To order memorial trees or send flowers to the family in memory of Robert Boon, please visit our flower store.