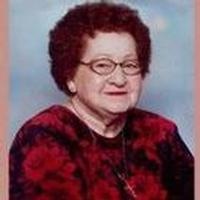 She had been married to John Derksen and they were the parents of five children: Eric, Erol, J.R., Rita and Janis.

Rita was a talented musician and shared her talents in her home, her church, and in her weekly show she hosted on ChristVision. She was a member of the First Baptist Church in Hamilton and taught Sunday School for many years. She worked hard all of her life providing for her five children. She was a health insurance sales rep for Combine Insurance, retiring in the mid 1980's. She was a Christian mother who woke each day wondering how she could serve the Lord. She was devoted to her grandchildren and family.

Funeral services were held Tuesday, August 9, 2011 at 10:30 a.m. at Wilson Funeral Home with burial following in the Wyaconda Cemetery.

Memorials were suggested to the T.B.C. Program at First Baptist Church in Hamilton, IL or Holy Rosary School in Monroe City.

To order memorial trees or send flowers to the family in memory of Rita Derksen, please visit our flower store.