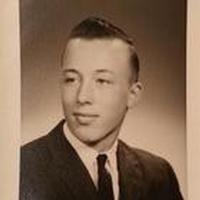 He married Mary Linda Ludwick and they were the parents of a daughter, Lisa.

Richard attended the Arbela Baptist Church and graduated from Kahoka High School in 1963. He enlisted in the Navy where he served on the USS Ticonderoga from 1964-1969.

Richard attended Bailey Technical School in St. Louis, MO and was an auto mechanic in the St. Louis area until his retirement several years ago. He enjoyed tinkering with his cars and tractors, caring for his chickens and horses, and growing a large garden on his hobby farm in Union, MO. His family and friends were very important to him.

Memorials were suggested to the New Woodville Cemetery or the American Cancer Society.

To send a flower arrangement to the family of Richard M. "Rick" Harris , please click here to visit our Sympathy Store.

To order memorial trees or send flowers to the family in memory of Richard Harris, please visit our flower store.