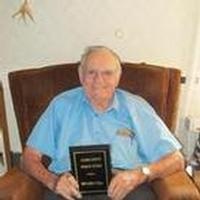 Richard was born May 7, 1919 at Clark City in Clark County, MO, a son of Richard F. "Lynn" and Eva P. Levengood Gregory.

He was preceded in death by his parents; his wife of 61 years, Lucille Gregory; a sister, Margaret Lakin and infant son, Richard F. Gregory, Jr.

Richard graduated from Kahoka High School in 1937 and from the University of Missouri in 1941. He was a life-long farmer and did custom farming and trucking until 1949 when he and Delbert Gutting began G & G Tractor Sales in Kahoka. He then owned Lewis Co. Tractor Sales until 1961 when he began working for Modern Security Life with Pat Jones which later became Ozark National Life, working until the age of 90.

He was the oldest male member of the Kahoka Christian Church and loved his fellowship there. He was also a member of the former Eagles social club in Kahoka and the NEMO Indians Camping Club. He enjoyed camping and spending time with his friends. He loved to play cards, fish, carry on a conversation with everyone he met, and most of all being with his family.

Funeral services will be held Friday, November 8, 2013 at 10:30 a.m. at Wilson Funeral Home in Kahoka with Rev. Jim Campbell officiating. Burial will follow in the St. Paul Cemetery at Kahoka.

To send a flower arrangement to the family of Richard F. Gregory , please click here to visit our Sympathy Store.

To order memorial trees or send flowers to the family in memory of Richard Gregory, please visit our flower store.