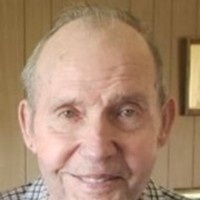 Raymond was born July 5, 1932 in Clark County, MO, the son of Asa and Lula Pearl Campbell Morehouse. He was united in marriage on August 24, 1952 to Rose L. Egley at the United Methodist Church in Wayland, MO.

Raymond worked for the Clark Co. Road District and then at Sheller Globe in Keokuk, for 42 years, retiring in 1994. He also farmed and raised cattle. He enjoyed visiting with his neighbors as long as his health allowed.

Raymond enjoyed being outdoors with his dogs and cattle and his Sunday morning church on the hill with the squirrels. He was completely at his happiest when he could have his entire family together. His kids and grandkids meant the world to him.

Funeral services were held Monday, January 6, 2020 at 10:30 a.m. at Wilson Funeral Home in Kahoka. Burial followed in the Zion Cemetery.

Memorials were made to the Zion Cemetery.

To send a flower arrangement to the family of Raymond L. Morehouse , please click here to visit our Sympathy Store.

To order memorial trees or send flowers to the family in memory of Raymond Morehouse, please visit our flower store.