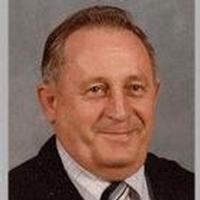 Raymond was born January 8, 1927, in Farmington, IA, a son of William Glen and Mabel

He was preceded in death by his parents; his wife; a son, Glen Skip House; one great-granddaughter, Melanie Skinner; and two sisters, Loretta Sampson and Delores Counts.

Raymond was raised in Farmington and moved to Keokuk in 1967. He moved to Revere in 1982 and resided there until his death. He was a licensed electrician, retiring from Keokuk School District where he was Buildings and Ground Supervisor.

He was a World War II U.S. Navy Veteran. His military career was a very important part of his life and he served many years as commander of Herman Blum Post # 192 of the American Legion at Kahoka.

Raymond's many interests included hunting, fishing, and gardening. He loved to ride his tractor and mow with his riding lawnmower. His family was the most important thing in his life and he loved watching the kids play. He was lovingly referred to as Grandpa Freddie by the youngest generation.

Memorials were suggested to Iowa Hospice.

To order memorial trees or send flowers to the family in memory of Raymond House, please visit our flower store.