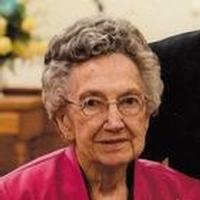 Phoebe Lucille Daw, age 90, of Kahoka, MO, passed away on Tuesday, July 22, 2014 in the Clark Co. Nursing Home in Kahoka where she had been a resident the past year and a half.

Phoebe was born February 9, 1924 in Hardin, IL, a daughter of Alonzo and Melissa Agnes Harlow Cox.

She was united in marriage to John Dayton Daw on October 19, 1940 in Alexandria, MO, by his father, Harry Daw, who was Justice of the Peace at that time. He preceded her in death on October 28, 2003.

She was preceded in death by her parents; her husband; two sisters; four brothers-in-law; and, two sisters-in-law.

Phoebe was a caregiver much of her life. She was employed by Drs. Kingsbury and Williamson and at St. Joseph Hospital when she decided to go back and further her education after previously attending Wayland High School. Later in life she went back to school to receive her GED and then became an LPN in August of 1967 as a graduate of Hannibal Public School of Practical Nursing. She continued her nursing career in Keokuk and later at the Clark Co. Nursing Home in Kahoka which she dearly loved.

A beautiful, sweet lady, Phoebe loved caring for her family, particularly her grand and great-grandchildren. She was a wonderful seamstress and in earlier days she and John loved to "neighbor" and do a little traveling. They enjoyed spending time at their cabin on Harold's land.

Burial followed in the Athens Cemetery.

Memorials are suggested to the Athens Cemetery or the Clark Co. Nursing Home Activity Fund.

To send a flower arrangement to the family of Phoebe L. Daw , please click here to visit our Sympathy Store.

To order memorial trees or send flowers to the family in memory of Phoebe Daw, please visit our flower store.