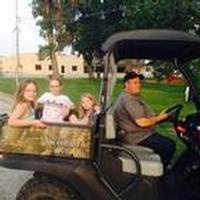 He married Donna Morgan in 1969 and they were the parents of two children, Shane and April.

He was preceded in death by his parents and brother, Rick Harris.

Ranny graduated from Wyaconda High School in 1964. He was a Vietnam Veteran, serving in the U. S. Marines. He was raised in the Baptist faith and was baptized as a child in Leeper's pond at Luray.

He retired at the age of 62 from Pinnacle, formerly Armour Dial, where he had worked for over thirty years.

Ranny was a member of the Clark Co. Moose Lodge. He loved riding his Kubota and checking on what was going on around town. He loved hunting, fishing, and working in his garden. He was a good cook and enjoyed trying out new recipes. He was a good friend and cared deeply for others and especially his family.

Friends may call at Wilson Funeral Home after 9 a.m. Friday with family receiving friends from 5-7 p.m. Memorials are suggested to the New Woodville Cemetery.

To send a flower arrangement to the family of Phillip R. Harris , please click here to visit our Sympathy Store.

To order memorial trees or send flowers to the family in memory of Phillip Harris, please visit our flower store.