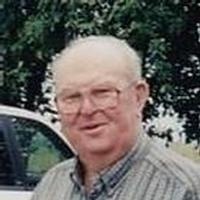 Paul was born September 15, 1922 in Hancock Co., IL, a son of Albert and Lela Hackett Harrison.

He and Barbara Clark were married October 12, 1947 in Kahoka by Rev. Monroe at the Methodist Parsonage.

He was preceded in death by his parents; a son, Chris Harrison; and two grandchildren in infancy.

Paul was raised in Hancock Co., IL, moving with his family to Revere in his senior year of high school. He graduated with the class of 1940 from Revere High School. He was a U.S. Army Veteran.

Paul farmed all of his life and in later years drove a truck for Ideal Ready Mix. He was a member of the Peaksville Christian Church and former member of the Revere School Board. Paul was an avid supporter of the Clark Co. Fair. He loved attending his children's school activities and their many basketball and baseball games throughout the school year and summer. He truly enjoyed his daily trips to the various coffee shops and the stories shared there. He looked forward to the twice monthly get togethers at the Revere Community Center. He also looked forward to reaching his 90th birthday and had a wonderful time celebrating this past month. He treasured time spent with his family.

Visitation was held at the Wilson Funeral Home in Kahoka after noon on Tuesday with family receiving friends from 6-8 p.m.

Memorials in lieu of flowers were suggested to the Revere Community Center, Revere Fire Department or the Peaksville Christian Church.

To send a flower arrangement to the family of Paul C. Harrison , please click here to visit our Sympathy Store.

To order memorial trees or send flowers to the family in memory of Paul Harrison, please visit our flower store.