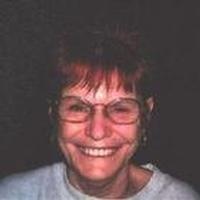 Pat was born September 17, 1946 at Macomb, IL, a daughter of Amos and Fern Knight Hancox.

She married Larry Moore and they were the parents of Brenda and Tina. On October 31, 1981, she was united in marriage to Brian Springer at the Kahoka Christian Church.

nephews and other relatives.

She was preceded in death by her parents and father-in-law, Newt Springer.

Pat graduated from Macomb High School. She was a former para-professional in the Carthage School District at Ferris, IL and following her marriage to Brian, an aid in the Knox Co. School District in Edina, MO, until her Multiple Sclerosis diagnosis.

Pat loved to read, color and work crossword puzzles. She had a great interest in the Indian culture and also enjoyed her soap operas. She had been a supporter of the Multiple Sclerosis Society. Most important to her was her family, particularly her grandchildren. They brought her happiness beyond measure and she displayed it with the great hugs she gave them.

Memorials were suggested to the Multiple Sclerosis Society.

To order memorial trees or send flowers to the family in memory of Patricia Springer, please visit our flower store.