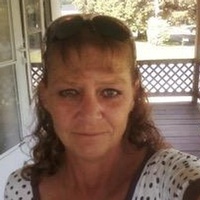 Patricia Hammond-Adams, age 54, of Kahoka, MO, died Monday, December 11, 2017 at her home. She was a three time cancer survivor who never gave up.

Patricia was born August 11, 1963 at Galesburg, IL, a daughter of Max and Carol Gardner Hammond.

She married Gary Roberts and they were the parents of two children, Randy and Samantha. They later divorced.

She was preceded in death by her father and two brothers, John Hammond and Joey Hammond (in infancy).

Patty was a 1981 graduate of Clark Co. R-1 High School and a graduate of Keokuk School of Cosmetology. She was a hard worker and was previously employed as a hair dresser, as serving staff in restaurants and seventeen years as a seamstress for American Apparel in Alabama. She worked at Industrial Opportunities in Kahoka as long as her health permitted.

She was a member of the V.F.W. Auxiliary in Kahoka and was a former member of the Clark Co. Moose Lodge. She enjoyed spending time with her many friends there.

Patty was kind and compassionate. She loved to joke and laugh and at times, dance. She enjoyed crocheting and sewing. She loved sitting on her swing listening to and sharing time with her grandchildren. They brought so much joy to her life and spending time with them and her nieces and nephews were her happiest times.

At her request, Patty has been cremated under the direction of Wilson Funeral Home in Kahoka.

Extended family and friends are invited Saturday, December 16, 2017 at noon to join her family for a luncheon at the Ayer-Boatman Post # 4342 of the V.F.W. in Kahoka followed by a time of sharing beginning at 1:30.

Memorials are suggested to the family for payment of her final expenses.

To send a flower arrangement to the family of Patricia Hammond-Adams , please click here to visit our Sympathy Store.

Friends are invited to lunch at the V.F.W. old highway 136 east of Kahoka for lunch followed by a time of sharing at 1:30 p.m.

Friends are invited to lunch at the V.F.W. old highway 136 east of Kahoka for lunch followed by a time of sharing at 1:30 p.m.

To order memorial trees or send flowers to the family in memory of Patricia Hammond-Adams, please visit our flower store.