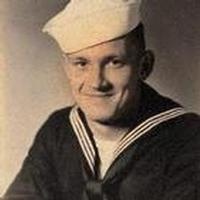 He was preceded in death by his parents and his wife, Evelyn.

Gene was a graduate of Wyaconda High School. While in school he rode the train to Kansas City during the summers where he sorted mail. It was during this time that he also earned his pilot license. He served in the U. S. Navy from October of 1945 until October of 1946.

Gene went to work for Standard Pipe Line and later did construction work. He was involved in the construction of Keokuk Lock and Dam # 19. He and Evelyn moved to Revere where he began his farming career. They farmed the rest of their life, moving from the Revere area to the Wyaconda area during the late 1950's and also raised livestock. He retired in the late 1980's and got rid of the last of his cattle in 2010.

Early in their married life, he and Evelyn raised field trial dogs. He was an avid coyote and coon hunter and was known all over the area for his coyote and coon hounds. He would coon hunt with his daughter on jumping mules which made for good story telling. The family also enjoyed trail riding and camping together. Gene was very talented on the guitar and if you were lucky you got to hear him entertain you with a song. His farm was and still is a very special place to him and his family and he was most happy when they could all be there together.

To order memorial trees or send flowers to the family in memory of Otis Priebe, please visit our flower store.