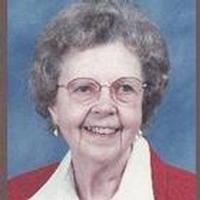 Opal was born May 2, 1913, a daughter of John and Estaline McCarty St. Clair at her parents home near Wyaconda, MO.

On April 16, 1938, she married Glenn R. Priebe at Monticello, MO and they made their home in Farmington. He preceded her in death on March 6, 1995. The past five years she had lived with her daughter in Kahoka.

She was preceded in death by her parents; her husband; five brothers: Charlie, Willie, John, Elmer, and Richard St. Clair; two sisters, Gertrude Webster and Elsie Webster; also, three half brothers and three half sisters.

Opal graduated from Kahoka High School in 1931 and later from Iowa Wesleyan College at Mt. Pleasant. She taught school for a total of 37 years and substitute taught 10 more years following her retirement in 1984. She began her teaching career in Missouri, from 1933-35 at Thompson School north of Luray, from 1935-37 at Keystone southeast of Wayland, and 1937-40 at Union School southwest of Kahoka between Cedar Grove and Ballard churches. From 1940 until 1954 Opal stayed home to care for her children. She started teaching at Primorse Rural School in Lee Co, and taught there the next seven years until consolidation of Central Lee School District. She taught at Central Lee until retiring. She touched many students and other people she came into contact with during her teaching career.

As a young girl Opal accepted the Lord as her Savior and served him the rest of her life. She was a faithful member of the First Baptist Church at Wayland, serving as church clerk, Sunday school and Bible school teachers for many years.

She loved to read and tend to her vegetable and flower gardens. She lived her life of faith with action and even in her 90's was preparing and sharing food for friends and neighbors. More than anything, she loved to be with her children and grandchildren and demonstrated a heart full of wisdom, loving and compassion.

Funeral services were held Saturday, February 4, 2012 at 10 a.m. at the First Baptist Church in Wayland with Rev. Dan Deatrick officiating. Burial was in the Greenglade Cemetery in Farmington, IA.

To order memorial trees or send flowers to the family in memory of Opal Priebe, please visit our flower store.