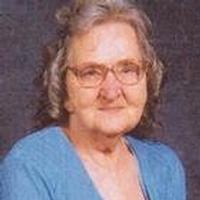 Nora was born February 28, 1923 in Butler, KS, a daughter of Alexander and Matilda Graft Criger.

She married William Oren Moore on April 18, 1946 in West Plains, Mo while he was serving in the U. S. Army during World War II.

Nora and William lived in Birmingham, IA, for thirty-five years, moving to Clark County in 1986. In 2007 she moved to Stockport to reside with her daughter, Shirley.

She had been a homemaker all of her life and was a known for her beautiful quilts, hand-embroidered gifts she shared with others and her excellent cooking, specifically her bread, noodles and pies. Her family was the heart of her home.

Funeral services were held Tuesday, May 21, 2013 at 10 a.m. at Wilson Funeral Home in Kahoka with burial following in the Keokuk National Cemetery.

Memorials were suggested to Hospice of Central, IA, Mt. Pleasant.

To send a flower arrangement to the family of Nora A. Moore , please click here to visit our Sympathy Store.

To order memorial trees or send flowers to the family in memory of Nora Moore, please visit our flower store.