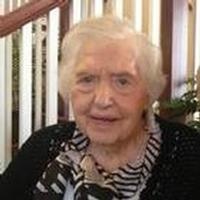 She was born on January 24th 1918 in Winchester, MO. Nettie Marie was the first child of Glenn Hunziker, Sr. and Ernestine Mae Kennedy Hunziker and was named after her Grandmother Nettie Hunziker. On June 6, 1935 Nettie was united in marriage to Marshall Bash Jr. in Monroe, MO.

Nettie was a loving wife, mother, grandmother, great-grandmother and a gentle soul to all who knew her. She had a quiet inner strength that sustained her and supported those around her. She admired her brothers and sisters dearly and so proudly told stories of helping to raise her younger siblings. Her own family was her pride & joy and as her soul begins it's endless journey forever, she leaves behind beautiful memories to fill the hearts of those she left behind. She was naturally gifted in her culinary skills and her love for cooking was evidenced in the results. All to the benefit of those who broke bread in her modest kitchen or at the many family reunions which were always a priority. She tended her garden carefully and liked to share with others what she cultivated there. Her homestead and flower patches were given no less nurturing and she truly appreciated nature's beauty that surrounded her. Once she discovered that African Violets happened to thrive with an abundance of continuous flowers inside her home, she masterfully propagated in excess of 100 of them from a few parent stock plants. She was creative in the works of crocheting, needlepoint, quilting and sewing. She especially enjoyed a good joke and laughing while playing cards with family & friends. As testament to her love for laughter, she named her only pets (a pair of geese) Fibber & Molly after the Iconic American Radio Comedy series.

Funeral services will be held Monday, April 22, 2013 at 11 a.m. at the Kahoka United Methodist Church with Pastor Shawn McAfee and Pastor Barb Hagerla officiating. Burial will follow in the Kahoka Cemetery.

To send a flower arrangement to the family of Nettie Marie Bash , please click here to visit our Sympathy Store.

To order memorial trees or send flowers to the family in memory of Nettie Bash, please visit our flower store.