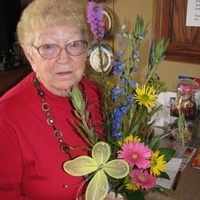 At an early age Neta Mae confessed her faith in the Master and joined the Providence Baptist Church in NE Missouri.

Neta Mae worked with Eston, her husband, in farming, raising hogs and cattle.

She worked at Sheller Globe from 1965 to 1969. During that time she became acquainted for Mr. and Mrs. E. W. Jones, owner of Kahoka Flowers in Kahoka MO. She decided to try florist work and completed Gladys Turner Florist School in St. Louis in 1969. After graduation, she worked for Mr. and Mrs. Jones and in Jan. 1971 she became owner of Kahoka Flowers. In Feb. 1978 she added women’s clothing and changed the name to Kahoka Flowers and Fashions. Kahoka Flowers and Fashions became well known in the Tri State Area and Neta Mae operated it until her retirement in Oct. 1991. She returned to the farm and then moved to Jefferson City, MO in September 1995 to be near her son James and his family. Neta Mae subsequently sold the farm on Sept. 21, 1996.

She was a life member of the D.A.V Auxiliary.

Visitation was held at 9:30am on Saturday, January 6, 2018 with services following at 10:30 a.m. at the Wilson Funeral Home in Kahoka MO. Recorded music selections were: "Will There Be Any Stars In My Crown", "Help Me Make It Through The Night", "Wind Beneath My Wings" and "Yellow Rose Of Texas". Pallbearers were: Ethan Kelly, Monty McAfee, Keith Kleine, Wayne Kirchner, John Plenge and Skeet Shipley. Honorary pallbearers were: Kay Kelly, Danny Kirchner, Wayne Blum, Deane Meinhardt, Stuart Strickler, Hiram Hiller (deceased), Bud Shipley (deceased), Dick Morris (deceased) and Patrick Park, Chaplain of Barnes Jewish Hospice. Burial followed at the Kahoka Cemetery.

To send a flower arrangement to the family of Neta Mae Holmes , please click here to visit our Sympathy Store.

To order memorial trees or send flowers to the family in memory of Neta Holmes, please visit our flower store.