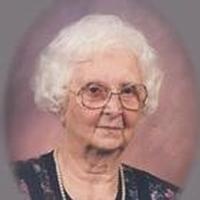 Maxine was born January 24, 1914, the oldest of eleven children of Herley and Lena Moorehead Ayer.

Maxine graduated from high school in Bloomfield, IA in 1932. She began teaching at Hutchings School in Davis Co. where she had attended school and her first students were her brothers and sisters - Marjorie, Robert, Alvin, and Marie. She next taught at Long and Darby schools, both in Appanoose Co. and in 1957-58 school year taught at Black Hawk in Davis Co. She first taught in Clark Co. at St. Francisville, and the next year at Jordan School in Scotland Co. She returned to Clark Co. the 1960-61 school year, teaching at Union and the following year in Clark schools in Clark Co. In 1962 she was a first semester substitute at Ft. Madison and continued teaching in Ft. Madison until 1966. From 1963-64 she taught at Richardson Elementary where her granddaughter, Dawn, now teaches. From 1966 through1978 she was employed in the Clark Co. R-1 School District. Following her retirement she provided day care in her home. Her entire life was spent caring for children.

Maxine was a member of the Kahoka United Methodist Church, of Kahoka Chapter # 40, O.E.S., and the Mo. Retired Teacher's Assn. She did embroidery work, sewing and scrapbooked for her family's special occasions.

Raising six children on her own, Maxine showed great independence as she worked hard and continued her education to provide for them. She gave each of them a wonderful gift in the example
she set for them.

Memorials are suggested to the Arni Memorial Cemetery or the Ayer-Boatman Post # 4342, V.F.W.

To send a flower arrangement to the family of Maxine R. Strickler , please click here to visit our Sympathy Store.

To order memorial trees or send flowers to the family in memory of Maxine Strickler, please visit our flower store.