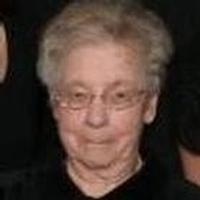 Dora Maxine Hunziker, age 89, of Kahoka, MO, passed away Wednesday, September 18,
2013 while a patient in the Keokuk Area Hospital.

Maxine was born August 27, 1924 in Kahoka, MO, a daughter of Carl and Bernice Arnold Neuendorf.

She married Harlan E. Hunziker on April 1, 1944 in Santa Anna, CA, while Harlan was serving in the U. S. Air Force during World War II. He preceded her in death on December 8, 2000.

She was preceded in death by her parents; her husband; two daughters-in-law, Janice Brammer Hunziker and Cathy Kirchner Hunziker; and brothers-in-law, Robert Hall and Wendall Reynolds.

Maxine was a graduate of Kahoka High School. Prior to her marriage she worked at the Exchange Bank and the former Murphy's Department Store. She was employed as a civilian in the military following her marriage until she and Harlan returned to Missouri in 1946.

Harlan and Maxine were crop and dairy farmers. She kept busy with caring for calves, cooking for the farm hands, and running farm-related errands in addition to raising their children. She was a member of St. Paul United Church of Christ in Kahoka and the courtesy committee for many years. She was a member of the former Enterprise Extension Club with many of her neighbors.

Following the death of her daughter-in-law, Janice, she and Harlan helped Gary raise their sons and had been active in their academic and sports activities through the years. All of her grandchildren and great grandchildren had a special place in her heart.

Funeral services were held Tuesday, September 24, 2013 at 10 a.m. at Wilson Funeral Home in Kahoka with burial following in the St. Paul Cemetery.

To send a flower arrangement to the family of Maxine Hunziker , please click here to visit our Sympathy Store.

To order memorial trees or send flowers to the family in memory of Maxine Hunziker, please visit our flower store.