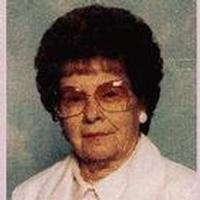 She was born December 5, 1925 in Rutherford Co., TN, the daughter of Dillar Jackson and Mamie Clemmons Gannon. She married Samuel Stephen Bair on January 15, 1944 in Detroit, MI. He preceded her in death on October 22, 1980.

Betty went to school in Murfreesboro, TN and while in high school was a correspondent for the newspaper. She went to Detroit, MI, in 1942 with an aunt and uncle to find work where she met and married Steve. They lived there for two years before moving to Kahoka to live out their lives.

She was preceded in death by her parents; her husband; her grandparents who raised her after her mother died in childbirth; a son, Stephen Edward Bair; sister, Mary, Sanders; brother, D. J. Gannon; step-brother, Tommy Lee Gannon; son-in-laws, Marvin Salyers and Ronald Champlin, Sr; and numerous sisters and brothers-in-law.

She was of the Methodist faith and in later years was baptized in the Baptist faith. Betty enjoyed bowling, reading, watching TV and going out with friends to eat. She worked at local restaurants over the years and Moores Business Forms, I.G.A. and Montgomery Ward in the Keokuk mall.

Betty was a good wife and mother spending a lot of time caring for Stevie who had numerous health problems. She always said he was special and cared for him with loving compassion.

A door swings briefly open, and a love one slips away, slips from lifes dark shadows into bright, eternal day. Where earthly griefs are over and pain shall be no more, to peace past

Funeral services will be held Thursday, October 13, 2011 at 2 p.m. at Wilson Funeral Home in Kahoka with Pastor Barb Hagerla officiating. Burial will follow in the Kahoka Cemetery.

Friends may call at Wilson Funeral Home after 9 a.m. Thursday with family receiving friends from 1 p.m. until time of services.

To order memorial trees or send flowers to the family in memory of Mattye Bair, please visit our flower store.