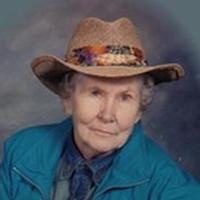 She was preceded in death by her parents; her husband; one son, Stanley Logsdon; and several siblings.

Mary loved being outdoors. She loved trapping and hunting, especially squirrel which was requested by her grown children whenever they returned home. She also loved fishing, gardening and raising animals. When her children were still at home, the family loved boating on the Mississippi with family and friends. In her 70's, Mary taught herself how to play the guitar and took lessons on the piano from Lucille Danker. Her children, grandchildren, and extended family were a very important part of her life.


A Mass of Christian Burial was held Saturday, August 8, 2015 at 11 a.m. at the Shrine of St. Patrick, St. Patrick, MO with Father Boniface, Officiant, and Pastoral Administrator, Kristen Roth. Cremation followed with inurnment at a later date.

Family received friends one hour prior to services beginning at 10 a.m. at the church.

To send a flower arrangement to the family of Mary E. Logsdon , please click here to visit our Sympathy Store.

To order memorial trees or send flowers to the family in memory of Mary Logsdon, please visit our flower store.