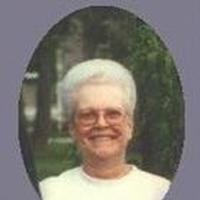 Her family moved to Clark County when she was a child and she resided there the rest of her days.

Survivors include one son, Dr. Stephen Justice and his wife, Marin, of Clarksville, MO;

one daughter, Sheila Justice of Kansas City, MO; a granddaughter, Leslie Lindsey and her husband, Nick, of Troy, MO; two great grandchildren, Adam and Collin; a brother, Ralph Mathys and his wife, Bernice, of Burlington, IA; a sister, Marcella Mathys Hess and her husband, John, of Tucson, AZ; brother-in-law and sisters-in-law: Raymond and Cleeta Justice of Kansas City, KS, Shirley Hagen of Milwaukee, WI, and Mary Justice of Memphis, MO; as well as nieces, nephews, and other relatives.

In addition to her husband, she was preceded in death by her parents; her stepmother, Bertha Woodrum Weaver Mathys, and a brother, Marvin Mathys.

Mary Lou and Francis owned and operated Justice Coffee Shop for 10 years from 1955 to 1965. The next seventeen years she was employed by Shellor Globe. She ran the "Junction 81 Cafe" for 3 years, worked at Gregory's Antiques for several years, and was last employed by Dadant Candle Factory.

Mary Lou was a member of Clark Co. Chapter # 59, Women of the Moose and served as Senior Regent for a year. She loved their annual project of providing Christmas gifts for needy children and put a lot of love and effort into it. She enjoyed crocheting, gardening, walking and visiting with friends.

To order memorial trees or send flowers to the family in memory of Mary Justice, please visit our flower store.