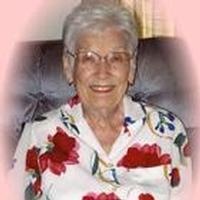 Mary Louise was born October 5, 1921 at Bevier, MO, a daughter of Fred and Nellie Pax Adams.

She was preceded in death by her parents; her husband; two son-in-laws, Bob Werling and Michael Cosgrove; a granddaughter, Stacey Haseltine; two brothers, Fred Adams, Jr. and Chester Adams; and a sister, Dorothy Kirchner.

Mary Louise attended grade school and graduated from Bevier High School. She attended college in Kirksville before her marriage. She and her husband lived and raised their children in Keokuk. After her children were grown, Mary Louise went back to college at Keokuk Community College and then graduated from Kirksville. She taught school in Alexandria and Running Fox, retiring from Black Hawk Elementary, all in Clark County. Following her husband's retirement from teaching in Keokuk, they moved to the family farm in Wyaconda.

Mary Louise enjoyed traveling, and her "traveling buddy" Dorothy Bertram. She enjoyed watching movies. Reading was what she loved and enjoyed most.

Cremation rites have been accorded. A visitation for family and friends was held Saturday, December 27, 2014 from 2:30 until 4:30 p.m. at Wilson Funeral Home in Kahoka.

Memorials in lieu of flowers are suggested to the H.E. Sever Memorial Library.

A Celebration of Life will be held this following summer at the family farm near Wyaconda with inurnment in the Liberty Cemetery, Williamstown, MO.

To send a flower arrangement to the family of Mary Louise Jenkins , please click here to visit our Sympathy Store.

To order memorial trees or send flowers to the family in memory of Mary Jenkins, please visit our flower store.