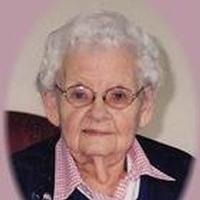 Mary Ann Hume, age 102, of Kahoka, MO, died peacefully on Thursday, February 6, 2014 at the Clark Co. Nursing Home in Kahoka where she had resided the past thirteen years.

Mary Ann was born May 18, 1911 at Williamstown, MO, a daughter of Thomas E. and Nellie Mae Ash Price.

She was preceded in death by her parents; her husband; a daughter-in-law, Sharon Hume on September 7, 2003; and a grandson, David Lynn Hume on October 29, 1969.

Mary Ann attended Union School # 57 and graduated from Kahoka High School.
She was a long-time member of the First Baptist Church in Kahoka.

She was a homemaker, and assisted her husband at their Standard Oil business for many years and worked several years for the former Fish Apparel and the Kahoka Lanes.

Mary Ann was a member of the former Senior Tuesday Club and a former member of the H. E. Sever Memorial Library Board. She spent a lot of time with her hobby of genealology. She and John P. loved to travel, square dance, and care for their grandson, John.

To send a flower arrangement to the family of Mary Ann Hume , please click here to visit our Sympathy Store.

To order memorial trees or send flowers to the family in memory of Mary Hume, please visit our flower store.